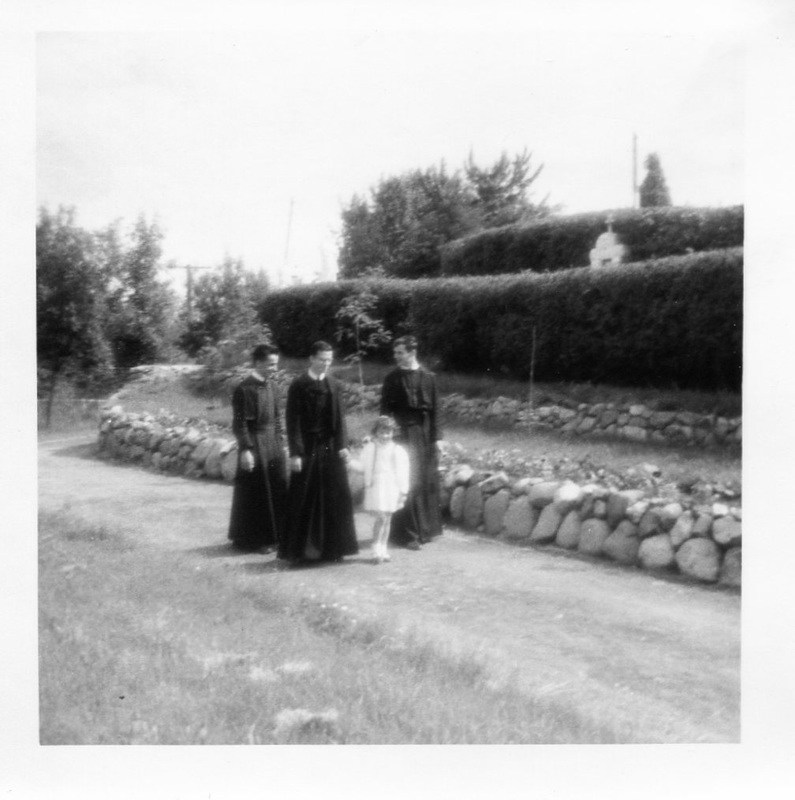 Basil:  Father Mark was born and grew up on a farming town 42 miles North East from Edmonton Alberta. My first impression was this person is friendly and humble, but also a born leader. Later I discovered that Father Mark was a compassionate soul and best friend to most people that cross his path. It did not hurt our friendship that he patiently listen to my updates on Space Exploration. With distinction Father Mark completed his education at the University Of Ottawa in both philosophical and theological disciplines before being ordained to the Catholic Priesthood.

Father Mark:  One of the most important goals in my service to God’s people is to convey and encourage them to follow the example that Jesus provided for us in: loving, caring, helping, supporting, encouraging, forgiving and being compassionate, friendly, patient towards one another. Many times this is easy when the “other” is an attractive person we absolutely know nothing about. But in reality, the “other” most likely is an obnoxious, selfish, stupid, cynical, mean, crude, evil, egotistic, petty, and … person. Loving and caring that person is almost impossible, and other types of responses are very tempting.

For some purpose, God put into our DNA the capability and potential to be good and bad people. At the moment of our birth, we not only inherit genes from our parents, but also all the good and bad baggage from our ancestors, culture, religion, country, and parents. Depending to what degree that baggage is constructive or destructive determines the opportunities we will have to be well rounded, well adjusted, productive and able to fulfill our destiny. For some life is mere survival (the poor in third world countries), for
others that destiny is to transform our world so that every life has
meaning and everyone can pursue their destiny. Most of us lie somewhere in
between with a free will to choose constructive (good) or destructive (bad)
behavior.

My job is to be a living example that was set by Jesus and guide people in the positive direction. I plan to share my efforts and progress in the “Letters from Canada” articles.

Every Sunday during services, I deliver a sermon based on the  teachings of Jesus. On this one particular Sunday, I thought I scored an easy  slap shot (a goal in Hockey). The topic was the parable in which three servants  are given “talents” by their employer, who then embarks on a trip. Some  interpret “talents” as property, others as money. Two of the three invested  their property and doubled the value of what they received. But one servant  decided not to invest, but just hold on to his property. When the employer came  back from his trip, he was pleased with the two that doubled their earning, and  was very disappointed with the one who basically did nothing. He rewarded those  two with additional “talents” and took away the property from the lazy one.

To make this story more current, I used two people that are globally familiar, Mother Teresa of Calcutta and Howard Buffet (Warren Buffet’s son). Since all of us know someone who lost their possessions because of out of control spending or unwise investments, there is no need to provide an example for the servant who lost his property in Jesus’s story.

Mother Teresa was born in Albania in 1910, became a Catholic Nun in 1931 and traveled to Calcutta India to teach at an all-girl’s school. During her work in Calcutta she was heartbroken in seeing people including children suffering and dying in the streets. After acquiring some medical training, She devoted her life to helping and comforting God’s children who She described as the “poorest of the poor”. Other women inspired by Her example joined Mother Teresa and formed a religious group named “Missionaries of Charity”. Today their number is 4,000 women serving the poor in 123 countries. Mother Teresa was awarded the Nobel Peace Prize in 1979.

Warren Buffet is Billionaire and in the news today because of his association with President Obama. Howard Buffet is his son and will become CEO when his father retires. So why is Howard Buffet a farmer working on a farm in Illinois USA? First he does like driving big tractors. But more important he is using his farming expertise to help farmers in Africa, Central and South America. He travels to those continents and mentors the farmers in all the aspects of farming. To succeed in farming today, the farmer needs to know a little about business and science in addition to weather and irrigation. Howard is using his financial wealth when needed to set up farmers and hope they will prosper on their own in the near future.

It is obvious that Mother Teresa and Howard Buffet used skills and resources that God provided to transform a small part of our world and enriched the lives of some of God’s children.

I felt good about this sermon until I got the following two feedbacks.

William (CEO, Financial banking and investments): Why was my life not used as example in this sermon? Howard Buffet is not a Catholic, his father is the
real business success story, and  he does not financially support our church.

Susan (Lawyer, Family& Business Law): Isn’t it ironic that Mother Teresa is great PR for a church (a male monarchy) that is a bastion of inequality towards women?

Father Mark: Feedback from Linda always cheers me up.

Linda (nursing home  volunteer): God has blessed me with so much that I worry about not doing enough for people that depend on me.

Father Mark:  In the next “Letters from Canada”, William and Susan will elaborate on their feedbacks.